Weather plays a big part in the way we dress, and given the increasingly inconsistent nature of global seasons, and the frequency of international travel in the 21st century, trans-seasonality is the buzzword in contemporary fashion.

No longer defined by a strict fall/winter and spring/summer annual calendar, designers today must contend with the addition of resort and pre-fall collections – those that not only sit on the shop floor for longer, but are greatly important for the business’ bottom line – as well as capsule collections, trunk shows and special collaborations. That seasons are no longer an important part of the design process – or, depending on the view you take, all the more important – was keenly felt at London Fashion Week, as designers contended not only with shifting weather patterns and a global, rather than local, customer base, but also the see-now-buy-now commerce system reshaping the fashion landscape. 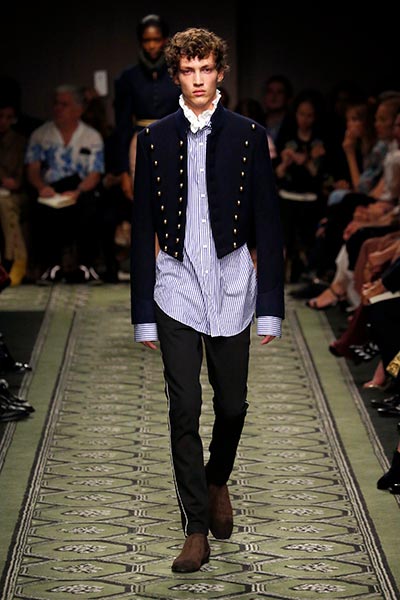 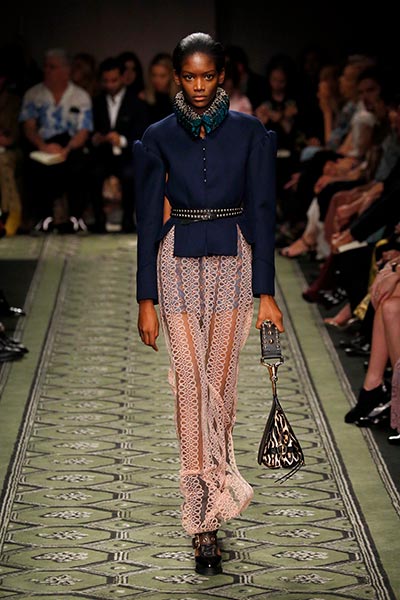 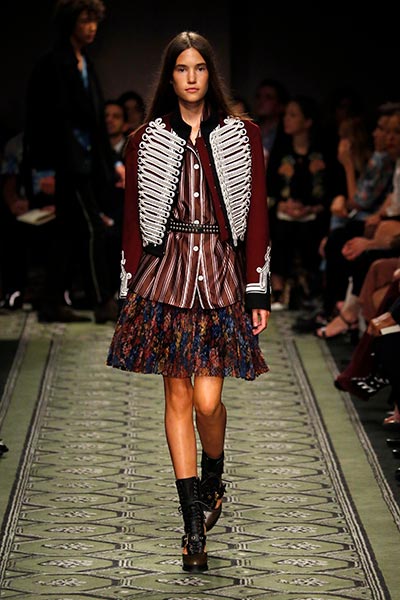 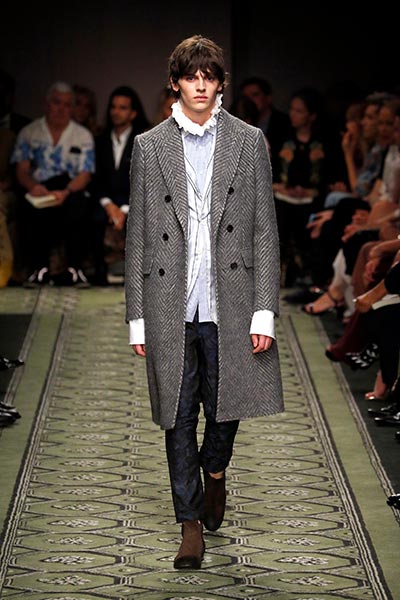 Storied British brand Burberry brand is, despite its illustrious history, an innovator in the digital domain, and its chief creative officer, Christopher Bailey, took that reputation seriously as he showed a collection that was titled not by season but rather more simply (September 2016), combined its men’s and women’s lines, and was available to buy in its entirety online as the models walked down the runway. Talk about overhauling the fashion system. The collection was said to be inspired by British author Virginia Woolf’s literary masterpiece Orlando, with Bailey employing the books play on gender by contrasting masculine and feminine styles across different periods in history. That was evident in the ruffle-sleeved, pussy-bow blouses, cropped wool military jackets, replete with gold buttons and epaulettes, peony printed quilted jackets, and wool and mohair herringbone coats, all of them perfectly suited to either a male or female customer. 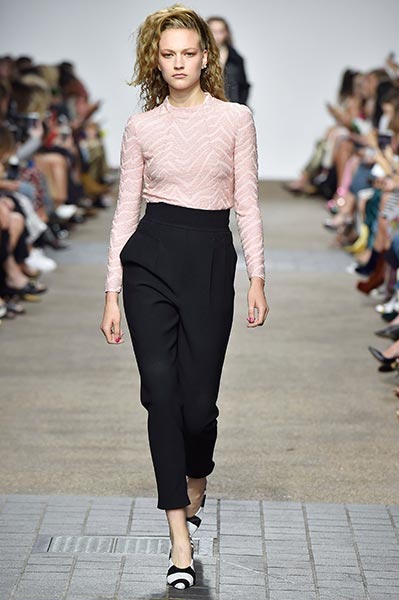 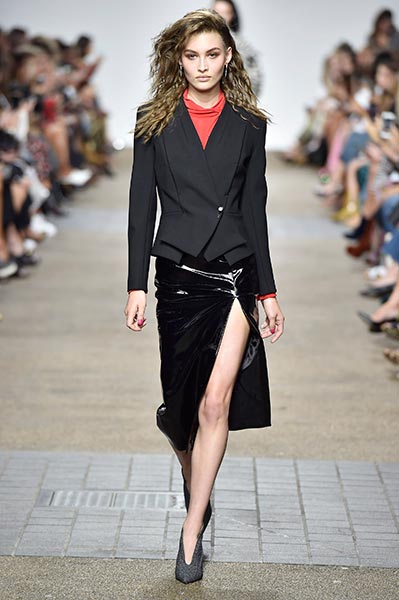 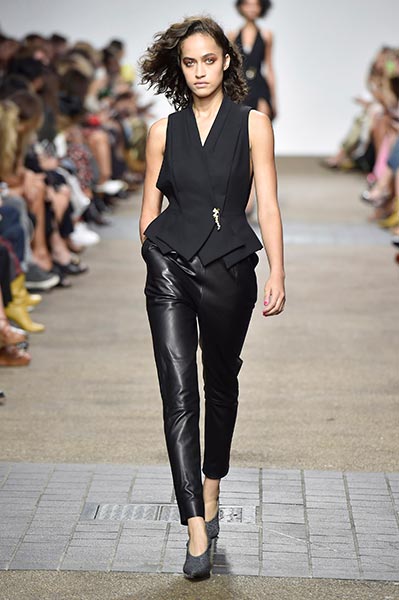 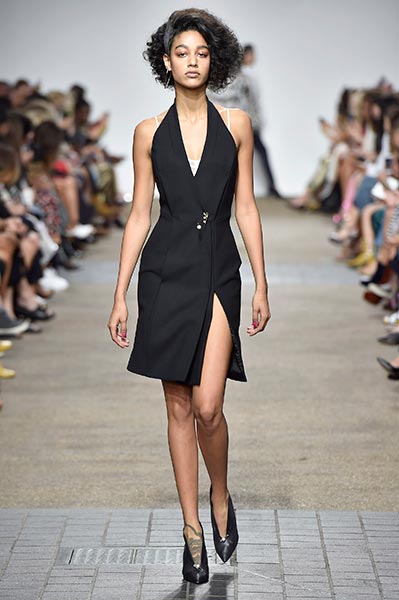 Conforming to the see-now-buy-now framework in a logistical sense takes time, but retailer Topshop is joining the action via its high-end runway line, Topshop Unique, by offering key pieces from the collection on its website immediately following the show. And inspired by the hedonism of London’s New Wave scene of the 1980s, girls will just want to have fun – right away – in these pieces that will take them from desk to dance floor with a hair tease and a coat of lipstick. Expertly tailored wool blazers (fastened to the side, and with ruched layers of fabric), double-breasted wool wrap dresses, and high-waisted, voluminous wool trousers were some of the highlights. 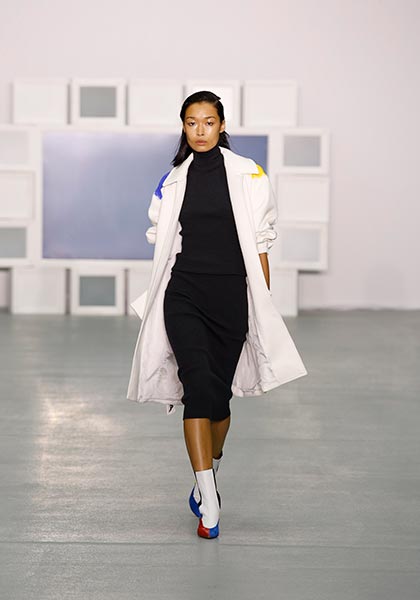 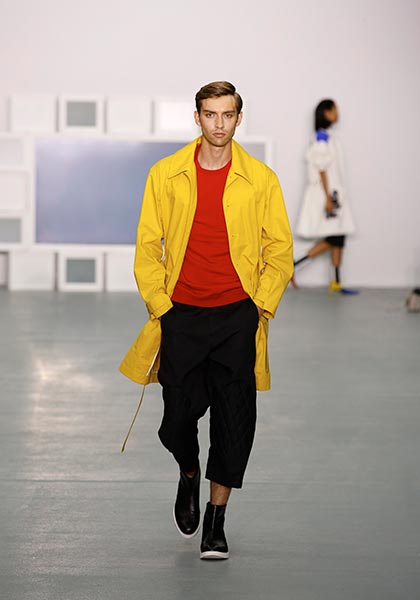 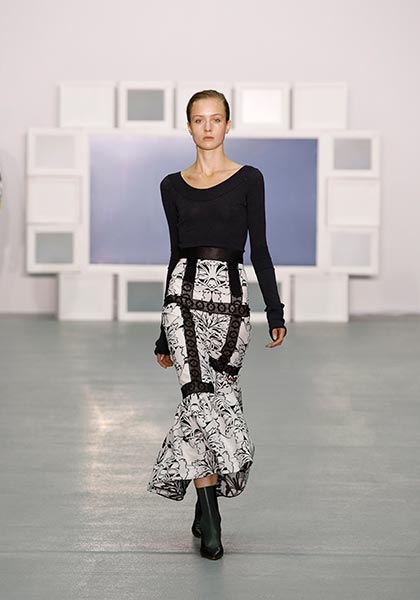 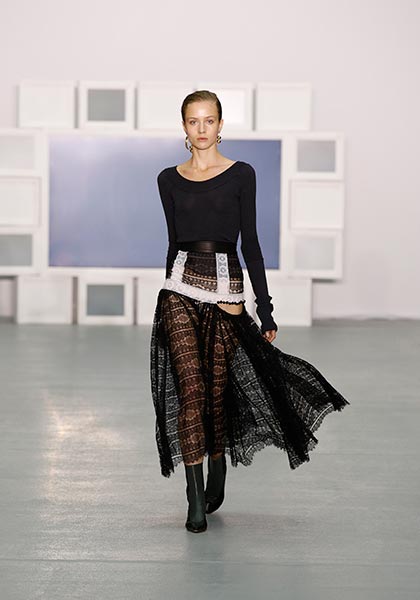 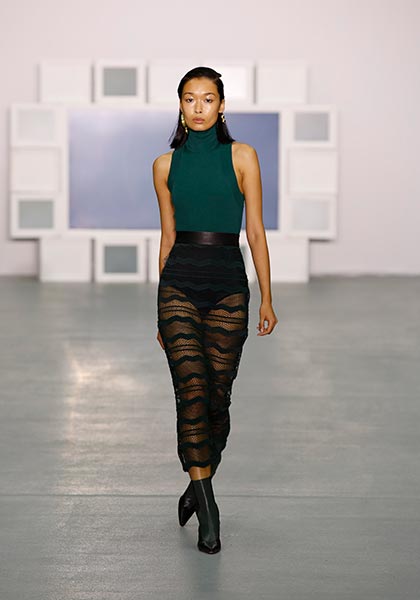 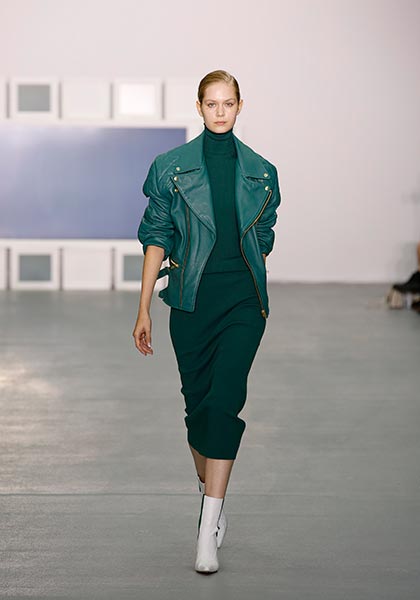 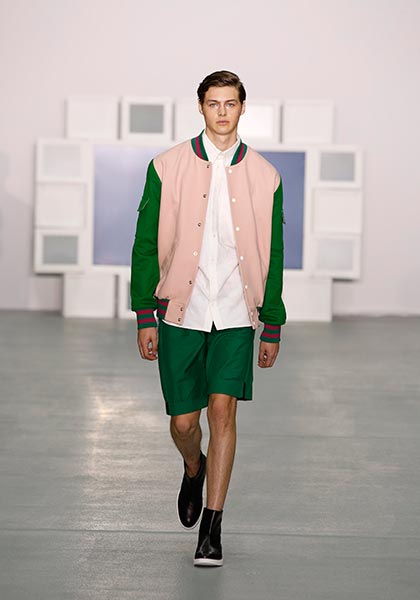 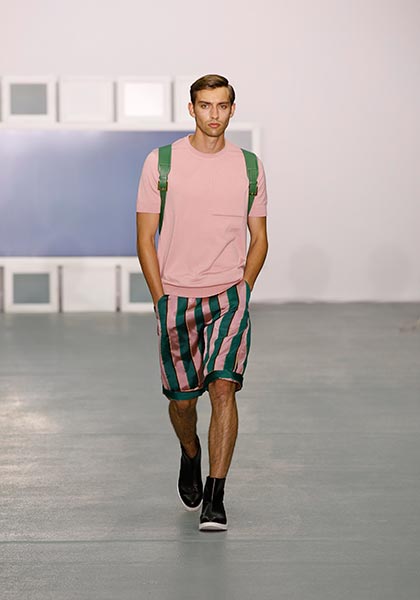 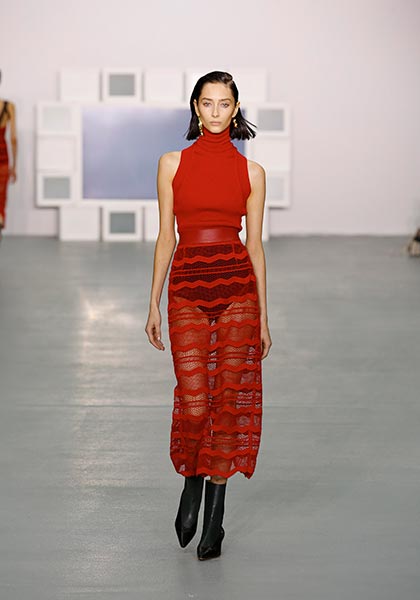 Recent International Woolmark Prize-winning label Teatum Jones opened London Fashion Week, and given their penchant for knitwear and long-line silhouettes, its offering tends to transcend traditional seasons by virtue of its making, and that was evident for spring 2017. Here, designers Catherine Teatum and Rob Jones showcased column-like Merino wool dresses updated with leather panelling, sleeveless knitted turtlenecks, and pieces hand-painted by artist Tom Leamon. And in keeping with the trend for fusing men’s and women’s collections, the designers – who both come from backgrounds in menswear – introduced for the first time a series of men’s looks, such as bomber jackets and knitted tees, to complement their narrative. See behind-the-scenes at the Teatum Jones show in our backstage gallery. 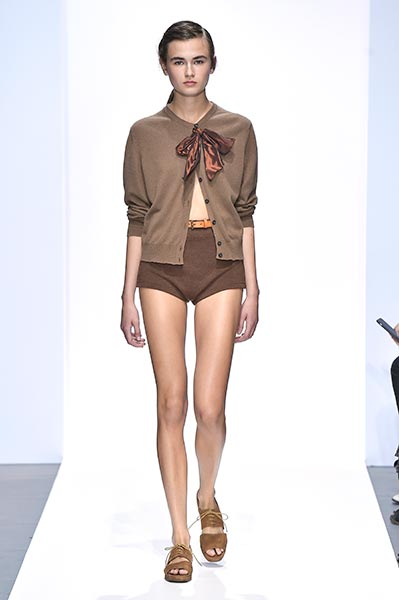 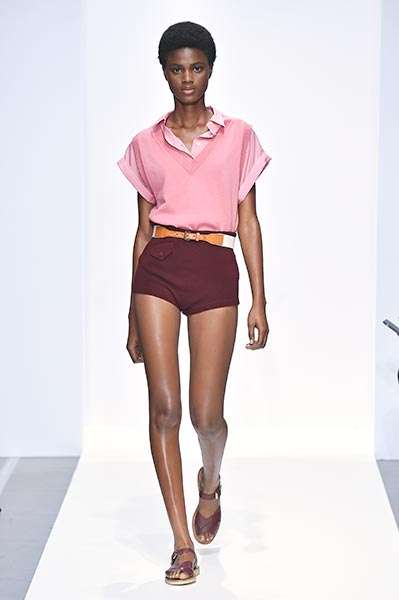 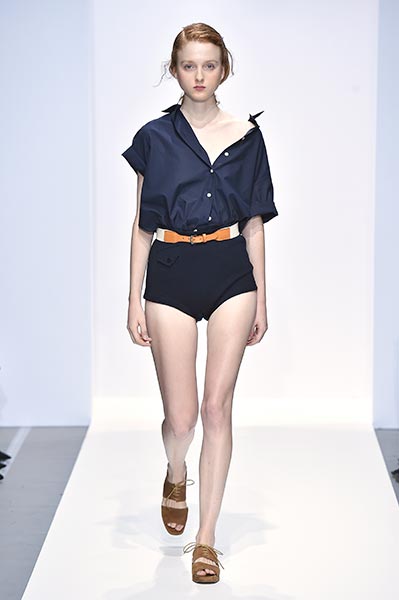 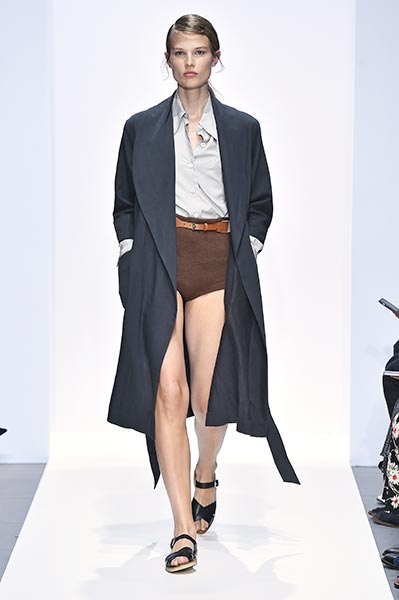 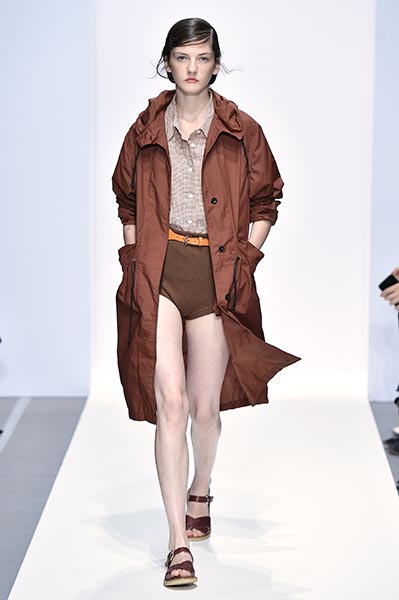 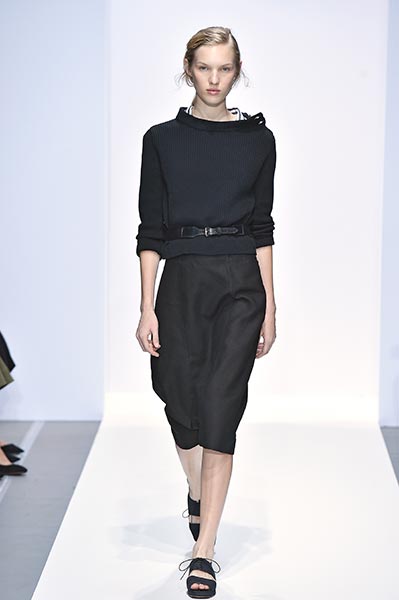 Elsewhere, designers played with seasonality their combination of traditionally season-specific garments. Margaret Howell, for example, mixed ribbed wool sweaters and cardigans with high-waisted swim-like trunks, these too knitted from wool. Palmer//Harding wrapped one of its summer striped cotton two-piece looks in a matching wool blanket. And Martine Jarlgaard showed long-sleeved, full-length, high-necked dresses – a typically winter look – in the lightest of wool blend fabrics, making it feather-light and wearable year-round.